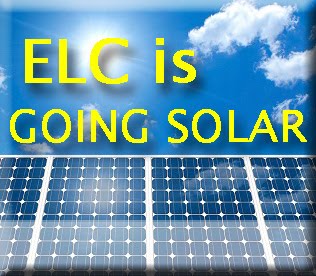 The system was in part donated by A&R Solar, who has been working with the church for more than a year to make this vision a reality.

“Donating a system is our way of saying ‘thanks’ and giving back to a community that supported us, while also raising awareness to the fact that solar works in western Washington,” says Dave Kozin of A&R Solar.

Edmonds Lutheran was selected by the Solarize South County Community Coalition, a volunteer group of individuals who led the award selection process. The competitive application process took into account the suitability of the facility to generate solar electricity on site and to serve as a public educational tool.

Rev. Dr. Julie Josund, pastor at Edmonds Lutheran Church has had a vision of making ELC a more eco-friendly building for many years. “We believe the caring for God’s creation goes hand-in-hand with Christian faith. Having solar panels on our church actively visible is a perfect way to get the word out about renewable energy options to many people. We are thrilled to have this partnership with A&R Solar and look forward to a fruitful collaboration in sharing the benefits of solar energy to our friends and neighbors in Edmonds.”

“Doing social good is baked into our DNA at A&R. We believe that solar energy can make the world abetter place in a very fundamental way. The problem is that current incentives make it hard for the people that would benefit from solar energy the most–those in need and the non-profits that support them–to adopt the technology. We’re committed to helping those organizations and those people gain access to solar energy by donating our time and a share of our profits to projects such as the one for the Edmond’s Lutheran Church and Annie’s Community Kitchen,” said Reeves Clippard, Co-Founder of A&R Solar.