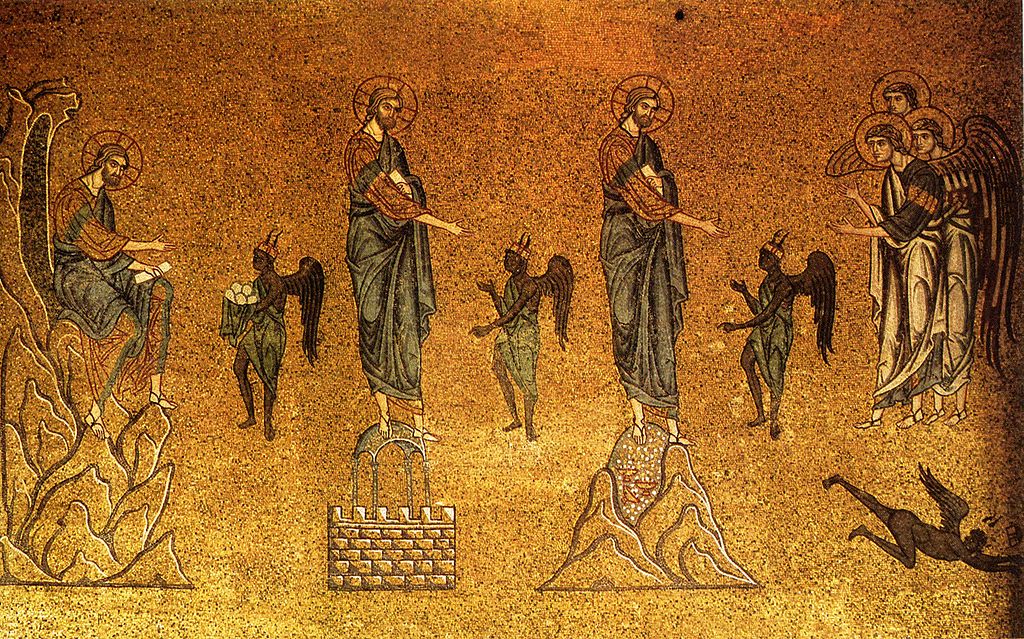 Eco-Justice Commentary on the Common Lectionary

Luke’s version of the temptation of Jesus in the wilderness, as Luke Timothy Johnson suggests, “discloses the inner character of Jesus’ sonship as one of simple obedience.” Following so quickly upon the identification of Jesus as God’s Son in his baptism, Luke’s sequence of temptations and responses reveals the characteristics and quality of that sonship. In “winning this most fundamental battle of the heart,” Jesus shows himself to be “true minister of God’s kingdom, obedient to the one who commissioned him (Luke 1:16), so that in all he does “God is with him” (Acts 10:38)” (The Gospel of Luke. Collegeville, Minnesota: The Liturgical Press, 1991, p. 75).

That is not to say that Jesus’ victory over Satan is merely spiritual, without external consequence. Each temptation, Johnson notes, “involves a seizure of palpable power: the theurgic ability to change the elements of creation, the political and military control of humans, the capacity to force God’s protection.” Read “against the backdrop of first-century Palestinian political upheaval and popular messianic expectation”’ we can “recognize that, in Luke’s understanding, Jesus eschewed the option of a violent, military, zealot vision of God’s kingdom in Israel.” Furthermore, of particular interest to our concern for eco-justice, Johnson suggests that Luke’s Christian readers can “learn something of their own path from the conscious decision of the ‘Lord Christ’ to choose other than a violent way to be Messiah, who rejected power over nature to serve his appetite, over humans for the sake of glory, over God for his own survival, in favor of the ‘path of peace’” (Johnson, 76-77). Applied to our racial and environmental crises, we might learn to resist unrestrained technological transformation of nature along with the oppression of those who are “other” than ourselves, by way of acknowledging that our status as children of God calls for trusting acceptance of our place amidst God’s creation and our human neighbors.

This last point is deeply significant. As Johnson points out, the placement of the third temptation on the high pinnacle of the temple in Jerusalem leads to the “dizzying suggestion that Jesus test his sonship against the promise of God to protect him.” Noting that the devil quotes from Psalm 91 (appointed for congregational use this Sunday), “He will command his angels concerning you, to protect you”, and “will bear you up, so that you will not dash your foot against a stone,” Johnson comments, “How clever, for what is the radical obedience of the servant except something very close to just such a blind leap? But Jesus does not succumb to this spiritual vertigo.” Anticipating the coming development of Luke’s narrative, Johnson observes that Jesus returns to the central text of Deut 6:13,“You will not test the Lord your God” not only to rebuke the tempter but also to state the conviction of authentic faith. Jesus will not force the Father’s hand. He will be the servant who “hears as those who are taught” (Isa 50:4), and who “walks in darkness yet trusts in the name of the Lord” (Isa 50:10), so that from a subsequent high place he can cry out while leaping, this time with his own choice of words from the Psalm, “Father, into your hands I commend my spirit” (Ps 30:6 [lxx]) (Johnson,p. 76-77).

Jesus’ refusal of the divine exceptionalism associated with the protection of angels as the meaning of his sonship, in other words, is driven by a central conviction of faith that will sustain him throughout his mission. That mission will not involve the domination of nature and nations that the temptations offer. The prospect of dominating nature, it is interesting to note, is addressed not only in the first temptation, but also at least implicitly here in the third. With his refusal to “test God,” Jesus has also sidestepped a second sign of divine favor mentioned by Psalm 91, although not quoted by Satan. The promised protection is extended in the psalm to his relationship to predators of the animal kingdom: “you will tread on the lion and the adder, the young lion and the serpent you will trample under foot” (91:13). So Jesus’ refusal of the temptation avoids as inappropriate to his sonship the domination of these creatures, in spite of their inherent danger to human life.

The location of the temple suggests a fuller development of the significance of this third temptation, in terms of the relationship between the people of Israel and the land. The temple is the sacred site where pilgrims bring their annual offering in the ritual described in our first reading from Deuteronomy 26, part of Moses’ farewell address to Israel as they enter the land. As Frederick Neidner explains,

In the new land, the people must remember to give thanks for all they have as gifts from God, and the ritual prescribed here instructs them how to do that. They will give thanks for having become a mighty and populous nation (v.5); for release from affliction, toil, and oppression (v. 7); for the inheritance of “a land flowing with milk and honey” (vv. 1, 9); and for the fruit of that land and of their own labors upon it (v. 10).

The ritual, that is to say, is recognition of the favor God has shown the people in the exodus from Egypt and settlement in the land. The “wanderers” were literally “’perishing,’ on the verge of being completely lost.” Each participant in the ritual confesses this as a present reality, “and not as one for whom that endangered state now resides in some hazy past.” “From such a threatened place and condition”, comments Neidner, “God’s mighty hand and outstretched arm rescued us from extinction. Surely all we have is purely a gift” (Frederick A Niedner, “First Sunday of Lent,” in New Proclamation, Year 2003 – 2004, Advent through Holy Week, Harold W. Rant, ed, Minneapolis: Fortress Press, 2003, pp. 147-48). It is important to note, then, that the feast that follows the ritual in celebration of the people’s well-being is to include those who have no inheritance in the land, namely the Levites and aliens who reside with them. They are to join equally with those who have wandered the wilderness and were “on the verge of being completely lost.” And as Niedner points out, Deuteronomy frequently stipulates that the people of Israel as a whole must look out for these groups who can claim no land of their own (12:18; 14:26-29; 16:11, 14).” The association of this reading with the Gospel suggests, then, that as well as rejecting domination over nature, Jesus’ refusal of the third temptation is clearly in line with this awareness of the land as gift and the inclusion of the landless aliens: one does not need to dominate the Earth or its creatures in order to gain assurance of God’s favor. As Niedner comments with reference to our own situation, “It comes naturally to think we brought ourselves here with our own mighty hand and determined arm. . . We engage in fatal deception when we allow ourselves to become gods and guarantors of life in the land of our own promises” (Neidner, p. 148).

Further consideration of the connection between the temple site of the third temptation and the ritual instructions given by Moses leads to a broader generalization of the point being made here. The site of the temple reminds us that in the creation account of Genesis 1, now commonly attributed to priestly authors, the assignment of kingly dominion in creation was a primary aspect of human responsibility. Jesus’ refusal of domination over nature and over nations would accordingly suggest that he rejects that understanding of dominion as the power to dominate, which Lynn White made a central critique of the Christian tradition’s anthropology. (For a brief and accessible discussion of White’s essay, “The Historical Roots of Our Ecologic Crisis,” see Leah D. Schade, Creation-Crisis Preaching: Ecology, lTheology, and the Pulpit, St. Louis, Missouri: Chalice Press, 2015, pp. 23-26). It is also significant; however, that Moses’ instruction regarding the gift of the first produce of the land involves the farmer, whose anthropological interests are advanced in the creation account in Genesis 2 and 3, counterbalancing the dominion language of Genesis 1 with a vision of the human as servant of the soil. And if there is a princely presence in Moses’ reference to “house” at the end of his instruction, the structure of the ritual suggests that the agrarian relationship to the land, one of “serving and keeping,” would apply to the rule of the king (See Norman Wirzba’s fine argument for the servant motif in his The Paradise of God: Renewing Religion in an Ecological Age. New York: Oxford University Press, 2003, pp. 123-145).

Indeed, this counterbalancing of priestly and agrarian perspectives reminds us that seeking favor in the eyes of God is in general fraught with trouble. It belongs to the Genesis narrative of creation that the first offerings given by Cain and Abel became the occasion for the first murder, leading to alienation between humans and the ground they were to care for. As we read in Genesis 4:4-5: “And the Lord had regard for Abel and his offering, but for Cain and his offering he had no regard. So Cain was very angry, and his countenance fell.” Two consequences follow immediately: first, the episode introduces into the biblical narrative the theme of sibling resentment and rivalry so central to Israel’s story in its entirely. God’s admonition to Cain is good counsel that will apply repeatedly, including in Jesus’ teaching: “Why are you angry, and why has your countenance fallen? If you do well, will you not be accepted? And if you do not do well, sin is lurking at the door; its desire is for you, but you must master it” (Genesis 4:6-7). And, secondly, when Cain fails to master sin and murders his brother, the alienation of the people from the land follows immediately: God says to Cain, “What have you done? Listen, your brother’s blood is crying out to me from the ground! And now you are cursed from the ground, which has opened its mouth to receive your brother’s blood from your hand. When you till the ground, it will no longer yield to you its strength; you will be a fugitive and a wanderer on the earth” (Genesis 4:10-12).

The desire to dominate thus leads simultaneously to resentment and violence between humans, on the one hand, and the loss of the land’s ability to sustain the people, on the other. Moses’ instructions indicate that in some measure the entry into the land and the enjoyment of its first fruits meant release from this dual curse: their wandering has come to an end and the land is fruitful, so the ritual of the first fruits can be joyfully celebrated by all who dwell there. So when Jesus refused to test God’s favor, was he also sidestepping this whole area of conflict? Or, in refusing the temptation to dominate nature and nations, was he not actively preparing to restore the relationship between land and people? Might his sonship and his mission seek this restoration for the whole creation? These are questions we shall have occasion to return to later in this Season of Lent.

Suggested Hymn of the Day: “O Christ, What Can It mean for Us” ELW 431

Prayer Petition: Gracious God, you are source and goal of all creation, both humankind and otherkind together. In this season of Lent, strengthen our hearts to resist the dreams and habits of domination that alienate us from each other. Lead us into Jesus’ way of peace so that we might reconcile with our neighbor and seek the restoration of your creation. In your mercy, hear our prayer.