First Sunday of Christmas in Year A 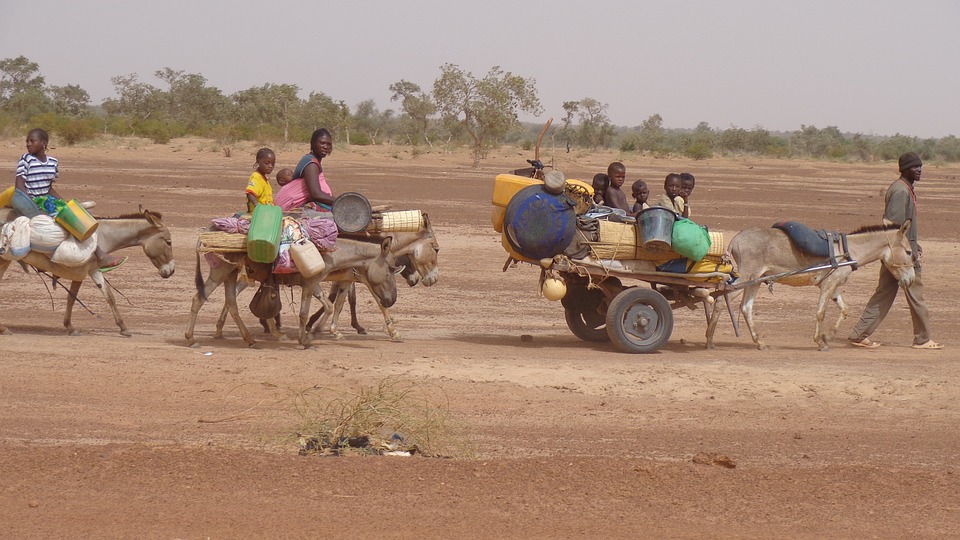 We need greater courage and imagination in standing up against those who would destroy Earth.  – Tom Mundahl reflects on Matthew 2:13-23.

My late father-in-law kept mules and an impressive Belgian mare named Dolly at his home in central Iowa. The few times that I spent Christmas there before pastoral duties occupied my Christmas celebrations, I noticed that on Christmas Eve he would spend more time than usual  in the barn with these powerful animals. It took me years to gather the courage to ask him, somewhat playfully, if it was true that on Christmas Eve even the animals give voice to Christmas joy. He merely smiled in a most mysterious way. As the traditional Matins service for Christmas Day suggests, it is a great mystery: O Magnum Mysterium.

We have just celebrated Christmas Eve and Christmas Day. As we continue the Season of Christmas, we have almost been convinced that “heaven and nature sing,” that “Mountains and all hills, fruit trees and cedars!  Wild animals and all cattle, creeping things and flying birds” (Psalm 148:9-10) join to celebrate the incarnation.  Then we are confronted with Herod’s slaughter of the “holy innocents.” Although we may be tempted to conclude that this is little more than an aberration on the way to the greater light of Epiphany, a close look at the infancy narratives in Matthew and Luke disabuse us of our naivete.

Did not the Christmas Eve reading from Luke 2 graphically subvert the pretention to divine power of Caesar Augustus in favor of “the Savior, who is Messiah, the Lord?” (Luke 2:11). In the face of the overwhelming military presence of Rome, this one was able to call upon “an army of angels” (Luke 2:13).  And these warrior-messengers proclaimed the good news in words stolen from Caesar, who had inscribed them on tablets throughout the Empire. The “good news of great joy for all the people” (Luke 2:10) and “the peace to God’s people” (Luke 2:14) use Caesar’s language to point to a new source of sovereignty, who as the genuine Savior and Lord brings “peace” to the earth (John Dominic Crossan, God and Empire: Jesus Against Rome Then and Now, San Francisco: Harper, 2007, pp. 107-108). How could this not have occasioned a violent response?

Much the same is true with Matthew’s infancy narratives. Like Luke, Matthew gives us a historically tenuous, but theologically rich prologue to his Gospel. Here, the Emperor is replaced by Herod the Great, a loyal vassal, who is now seen as an analogue to the Pharaoh of the Exodus narrative. In fact, it could be argued that Matthew gives us the history of Israel compressed. This evangelist begins the story of Jesus with quotations from Genesis (1:1), Exodus (2:15), and Deuteronomy (507) (N. T. Wright, The New Testament and the People of God, Minneapolis: Fortress, 1992, p. 402). Clearly, it is the Genesis and the Exodus quotations that interest us most as we enter Matthew’s worldview.

Our Gospel text continues Joseph’s role in Matthew’s prologue, now orchestrated in three “movements” each with a formula quotation to root it squarely in the continuing story of God’s people. Once again, Joseph’s sleep is interrupted by a divine messenger who makes it clear that he is to take the family to Egypt with great haste for Herod seeks to destroy this ‘new king’ (Matthew 2:13). Like Mary in Luke’s Gospel, Joseph continues to model obedience and follows the angel’s instructions exactly. They remain there until Herod’s death.

It is just this displacement that invites Matthew to recall the line from Hosea 11:1, “Out of Egypt I have called my son.” If this prologue is unhistorical, the use of such formula quotations as these give greater theological significance to these events. The quotation from Hosea is there to let the reader know in no uncertain terms that Jesus is involved with a New Exodus, an Exodus that will result in a new community. Whether it is Pharaoh or Herod, God will provide not only a new Moses, but one who is greater than Moses.

This parallel is made even clearer in the ‘second movement’ of our pericope, where Herod follows Pharaoh in the killing of infants in the region of Bethlehem (Exodus 1: 22). Here, the formula quotation is from Jeremiah (31:15). Not only does Matthew reference Pharaoh’s infanticide here, he asks readers to recall the near destruction of God’s people (symbolized by “Mother Rachel,” who is reputed to have been buried near Bethlehem) as they gathered at Ramah, the staging area for deportation to Babylon (Jeremiah 40:1). Here Matthew clearly associates the killing of children with the near death of religious identity during this chapter in the history of God’s people.

Not only is Herod the Great associated with Pharaoh, his actions clearly put into question any possible claim to legitimacy. How can any ruler kill the “next generation” of his people and make any claim to kingship? Herod’s obsession with total control here seems to spill over into shocking violence! This certainly is a question that we hear today in regard to Syria and the Central African Republic. Perhaps we need also to question more deeply the plight of children in richer countries who suffer shocking increases in asthma, attention deficit disorder, hunger, and a basic lack of loving attention from family structures. Is this not little more than a more ‘palatable’ form of infanticide?

But even obsessed rulers die. Once more, Joseph’s sleep is troubled.  This time the message is welcome: “Get up, take the child and his mother, and go to the land of Israel, for those who were seeking the child’s life are dead” (Matthew 2:20, see also Exodus 4:19). But all is not rosy. Because Archelaus, the cruelest of the tetrarchs, rules their former home area, they must locate farther north, in the Galilean micro-village of Nazareth. Here Matthew stretches things a bit by inventing his own formula quotation: “So that what had been spoken through the prophets might be fulfilled, ‘He will be called a Nazorean’” (Matthew 2:23).

Matthew solves one important problem here: He relocates the Holy Family from the Davidic town of Bethlehem to Nazareth. But he also creates much thornier problems of understanding! Since these formula quotations have provided rich theological ore, what can we learn? Is this a word play where we are to understand that Jesus is neser, the branch from the “stump of Jesse?” (Isaiah 11:1-2).  In addition, might this also refer to this child who is Emmanuel being nazir, a “nazirite,” one consecrated to the LORD? (Numbers 6:2). Yes, the church has affirmed Jesus as “the branch from the stump of Jesse,” and Jesus is certainly consecrated at baptism, although the ascetic John the Baptist fits the “nazirite” model more closely.

Or, is there an additional meaning, as suggested by Luz? “The geographical statements of 2:19-23 anticipate the way of the Messiah of Israel to the Gentiles. This thesis is supported from another side: exactly in the Syrian area in which the Matthean community is living, “Nazorean” is the designation for a “Christian. Thus, an ecclesiological note is sounded: because Jesus comes to Nazareth in the Galilee of the Gentiles, he becomes a “Christian,” the teacher and Lord of the community that calls on him and preaches to the Gentiles” (Ulrich Luz, Matthew 1-7, Minneapolis: Augsburg, 1989, p. 150).

If we follow this lead, we will see that even in the Matthean prologue, the call to “go to all nations” (Matthew 28:18-20) given by the one who is Emmanuel (“with you until the fulfillment of all things”) is powerfully present. This is why “heaven and nature sing!” And it is why parochial rulers, like Herod, obsessed with maintaining and expanding power, cannot tolerate this new birth of interconnected life. Their power depends on fragmentation, “divide and rule.”

Whether we argue that breaking down barriers that exclude non-Jews implies including all creatures in this new “genesis” or that the new community’s claim that this birth of the Holy One as part of creation engenders songs of praise from sun, moon, stars, wild animals, all cattle, creeping things, and flying birds and even kings of the earth (Psalm 148:3,10,11), the results certainly have one thing in common. This divine intrusion has the capacity to provoke those in power to maintain that domination with such tenacity that the results become increasingly destructive.

The motive is the same, whether it is a Holocaust of millions of Jews, the near elimination of Native Americans, or the use of military-based munitions to blow off mountaintops in Kentucky to mine the coal that continues not only to be a primary source of carbon pollution in the atmosphere, but also poisons the water near coal mining centers and kills miners with an alarming upsurge of black lung. Because they are born out of anxiety, power and control brook no opposition.

Because the one Matthew calls Emmanuel is “the teacher and Lord of the community which calls on him and preaches to the Gentiles” (Luz, op. cit.), this community is called not only to join in praise with all creation, but also to be involved in making sure that all creatures—including people—are free to engage in such praise. This is why 77-year-old Wendell Berry joined with Kentucky neighbors in 2011 to protest the destructive effects of mining companies by “sitting in” one weekend in offices of the Governor of Kentucky. They had concluded that the only way to force even a limited conversation with a government that does the bidding of large corporations was to go beyond normal, blocked forums of decision-making and participate in civil disobedience (conversation with Bill Moyers, available on BillMoyers.com).

To prevent the “slaughter of the innocents,” whether children in Newtown, Connecticut, polar bears in the Arctic, or the carbon pollution of a healthy atmosphere, the community gathered in the name of the one called Emmanuel needs greater courage and imagination. Perhaps we have to emulate Berry’s “mad farmer,” who says, “If it be my mission to go in at exits and come out at entrances, so be it” (“The Contrariness of the Mad Farmer” (Farming: A Handbook, New York: Harcourt, Brace, Jovanovich, 1970, p. 44).