God in Forests: Who is Jesus for Chipmunks? 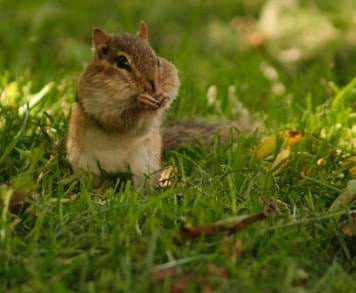 A Service In and For the Forests – Feel free to share this worship service or get ideas – we appreciate acknowledgement!

Who Is Jesus for Chipmunks?

For maybe twenty-five years, I’ve mulled over a theological question that makes me feel a little foolish. I never raised it in a seminary class or talked about it with a professor, and when I’ve tentatively mentioned it to a colleague or two, they’ve looked at me like, “What???” But this question keeps coming up for me, and that kind of insistence in my life is sometimes God’s way of nudging me to stick with something that matters. So, even though you’ll probably laugh or give me the “What?” look, I’m going to share my theological question with you: “Who is Jesus for chipmunks?”
Stated more broadly, I guess this is a question about Jesus’ relationship with life other than human life – with chipmunks and vultures, worms and whales, Easter lilies and Queen Ann’s lace, cornfields and baobab trees. Who is Jesus for the rest of God’s created world? Does other-than-human life need Jesus, just as we do?

Martin Luther taught that “God writes the Gospel, not in the Bible alone, but also on trees and in the flowers and clouds and stars.” Luther must have thought that something important about being saved, about being made whole, is written right on creation itself. And Luther perceived God as “entirely and personally present in the wilderness, in the garden, in the field.” Imagine that! In suggesting that the gospel is not only proclaimed in Jesus but also revealed somehow in creation itself, maybe Luther too had been wondering about who Jesus is for chipmunks.

I don’t have a definitive theological conviction about this chipmunk thing yet, but over the past couple years I’ve felt something shifting in me that makes me way more attentive to all of life, not just human life, and to God’s relationship with life itself on the planet we all call home. Where I’ve been, who I’ve met – especially Phoebe, and what I’ve read has given me new and helpful vocabulary about “the web of life” and about “other-than-human life” and about how everything belongs, everything is connected, every kind of life matters.
Throughout my ministry, I’ve talked about the Bible as the long story of God’s loving way with God’s people, and although that’s true, it doesn’t seem quite sufficient anymore. I see how I’ve skipped over the part of the Flood story where the rainbow is a sign of the covenant God makes not only with humankind, but also with all the creatures of the earth. God saves life. People matter, but we’re not all that matters to God.

When I was on sabbatical a couple years ago, I invited you all to “notice and note” the created world around you with the hope that you (and I) would really see more, would care more about what we noticed, and would be moved to care for God’s creation more faithfully and intentionally. While you were here noticing the world around you, I was in the Upper Peninsula of Michigan noticing and noting the national forest in which I could drive at least ten miles in every direction and maybe only cross one road. It was amazing, dense, dark, humbling. I was fascinated by all the life around me at Carrie’s cabin – the jackpines with cones that only open under intense heat so that new life can begin after a forest fire, the trees with straight rows of woodpecker holes in them – like corncobs, the eagles that dove for fish in the lake in front of the cabin and took their catch home to the eaglets in their massive nests. I saw more, I learned more, I cared more. I felt more connected to creation and to all life.

For days, I tried to identify some other huge birds that I knew weren’t eagles and didn’t seem like osprey or hawks, either. Finally, I saw one – then another, and then a third — land in a couple dead trees fairly nearby. I grabbed the binoculars, zeroed in on those birds, and discovered that they were huge, ugly, disgusting, bare-headed, hunched-over vultures. Ha! I laughed out loud because I was expecting beauty and grandeur but I got these less-than-lovely scavengers who nevertheless are a really important part of the web of life. We need those vultures!

In the UP, I saw the startling, bare, ruined earth where land was being clear-cut for the sake of more and more new construction, for joining house to house to house, despite its cost to the life of the forest community. I learned a little about woodlot management where mules or horses are used to haul out what is selectively cut, instead of using massive machinery that makes it necessary to cut more in order to sell more in order to pay back the massive loans on that incredibly expensive logging equipment. It’s a pretty vicious cycle and a pretty grim story.

Right alongside all this, I was reading Earth-Honoring Faith, Lutheran ethicist Larry Rasmussen’s urgent call to sing faith’s song in a new key – an unfamiliar key that no longer treats the earth only as something to be used, even exploited, by humankind, but in ways that foster the well-being of all creation, ways that “sing to the Lord a new song.” Spirituality and ecology become allies in this transformation, for the sake of the world God created and loves.
Back in 1971, Dr. Seuss wrote The Lorax, and it’s still a call for voices that will speak for the trees and for people who will act for the sake of nature’s well-being. In a way, it’s even a call to what Old Testament scholar Walter Brueggemann names as “a new ecological perspective in which the earth and all of the creatures of the Earth are treated like covenant partners who are entitled to dignity and viability. Every acre,” he says, “every squirrel, every radish, every whale, every cornstalk is entitled to viability and respect.”
The Lorax calls us to speak for the trees and act for the sake of creation, but scripture, creation itself, theologians, and ethicists call us to do so because we are people of faith, because we know Jesus, because we love the world that God loves. “God so loved the world” – the cosmos, the planet, the people, the trees, the oceans, the creatures, even the chipmunks – that God came and lived among us on this beautiful blue marble that is life’s home. And not just for our lives, but for all the life we know.

When our fallenness, our sin, our very human unwillingness to let God be God in our lives compromises other life and maybe the life of the planet, God’s saving work in Jesus matters, and our faithful response to God’s grace matters, too. Never before has human life had so large an effect on our planet, and that just might call for an enlarged understanding of what it means to live faithfully. Our assumption that human life matters most to God might be challenged by the gospel written in trees and flowers and clouds and stars; in beauty, wonder, well-being, fullness of life, and harmonious relationship with God and all creation; in life together that’s more like life in the kingdom Jesus came preaching.

It may be quite a shift for you to take that “new ecological perspective” Brueggemann describes “in which the earth and all of the creatures of the Earth are treated like covenant partners who are entitled to dignity and viability.” I’m still in the midst of that shift myself. You might wonder about, be drawn to, challenge, or even resist such a new perspective, but perhaps we can’t sing in a new and unfamiliar key without a new perspective. It won’t be easy, but it might be necessary for us as people of faith. If Jesus came that we might have life and have it abundantly, such abundance surely includes respect for the life of, as Brueggeman puts it, “every acre, every squirrel, every radish, every whale, every cornstalk.”
Every chipmunk, too.

Attributed to Luther, cited in Awakening to God’s Call to Earthkeeping, elca.org