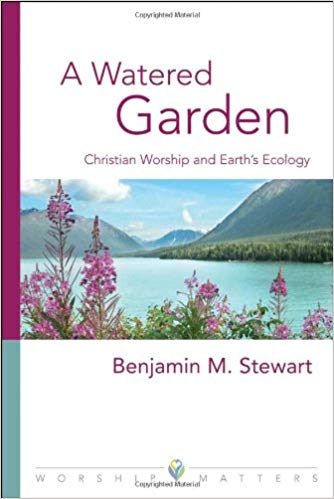 Eco-theologians and lay readers alike have a new, paperless way to learn about ecology and Christian worship. The Rev. Dr. Benjamin M. Stewart’s book A Watered Garden: Christian Worship and Earth’s Ecology is now available in a Kindle edition.

A Watered Garden links worship with God’s creation, drawing connections between the natural world and ecumenical patterns of worship. Stewart draws from his research at Emory University, where he was a Piedmont Fellow in Teaching and the Environment, and his years of scholarly work at the Lutheran School of Theology at Chicago, where he is the Gordon A. Braatz Assistant Professor of Worship and dean of the chapel.

Stewart’s book, first published in a print edition in 2011, has received widespread praise. The Christian Century selected it as one of ten best new books in ethics for spring 2012. The magazine also featured excerpts from A Watered Garden as its cover story for its January 2011 issue.

“With elegance and delightful clarity, Benjamin Stewart has drawn many strands together to reveal the ways in which Christian worship shapes Christian care for this earth,” wrote Prof. Samuel Torvend of Pacific Lutheran University.

Larry Rasmussen, Reinhold Niebuhr Professor Emeritus, Union Theological Seminary, says, “This instructive little volume does just what is needed for Christianity’s ecological phase; namely, make the vital connections between classic elements of worship and care for creation as holy ground. To do so with water, but also food and our bodies themselves, brings power and connection to both liturgy and daily practice.”

Chaplain to Muhlenberg College Callista Isabelle adds, “Stewart balances a sense of urgency to care for the earth with a steady reminder of God’s promise of renewal made known to us in Christ’s resurrection. We are invited to draw from deep liturgical roots to care for the holy ground on which God has planted us—local community and global home.”

Stewart is currently writing a book proposing a liturgical theology of natural burial practices. The Kindle edition of A Watered Garden is available on Amazon (Augsburg Fortress, 2011, $8.99).