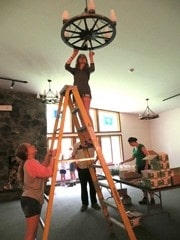 How many young people does it take to screw in a light bulb? What sounds like the start to an overused joke was in fact a serious question last weekend when high school youth recruited by our synod’s Environmental Stewardship Committee volunteered to help improve energy efficiency at Koinonia. Led by Pastor John Flack of Christ, Floral Park, and Brandon Chenevert, staff member at Koinonia, the team of ten youth spent two days making simple improvements to the camp’s facilities that will save both energy and money in the long term.

The weekend started off with a team-building session filled with games and activities intended to build community and encourage communication among group members from four different congregations. Chenevert, who previously worked for a Minnesota non-profit that improves energy efficiency in private residences, made a presentation on climate change and energy conservation in order to raise the group’s awareness and contextualize the importance of the work they were about to accomplish. The group spent the rest of the weekend working on two main projects: replacing all of the incandescent lightbulbs in the Koinonia dining hall with energy-saving compact fluorescent lightbulbs (CFLs) and caulking around windows in three other buildings on site to reduce air flow and heat loss. 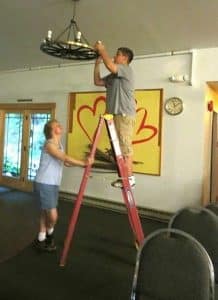 Youth participants and leaders alike were enthusiastic about the opportunity to learn more about energy conservation and to make a difference at Koinonia. Olivia Souza of St. Andrew’s, Smithtown, was excited to improve Koinonia’s energy efficiency because she believes that “humans need to leave different marks on the world that aren’t harmful in order to heal the scars we’ve made so far.” Pr. Flack, a member of the Environmental Stewardship Committee, was pleased that the youth learned so much about conservation because he believes that the greatest challenge facing the church–and the world–is thoughtful environmental stewardship. Jack Shipsky and Paul Ulmer of Christ, Floral Park, were proud that they helped accomplish so much in just one short weekend to help save Koinonia both energy and money.

While most of the youth had never replaced lightbulbs or caulked before, they were impressed by how simple it was to make improvements that can have a big impact in both commercial and residential settings. Olivia commented that caulking “had a bit of a learning curve” but that she hopes to use the skill when she returns home to help make sure her parents’ house is better sealed. Paul said that the projects were easier than he thought they were going to be but took some time and planning to implement. Jack noted that “it was fun, not boring to make the improvements.”

At final tally, replacing the lightbulbs in Koinonia’s dining hall saved a whopping 5640 watts. Though it is harder to calculate the energy-saving impact of caulking around windows, Chenevert emphasized,”it’s a critical part of energy conservation because it saves so many therms…I can’t recommend it enough.” Thanks to the work of youth volunteers from the Environmental Stewardship Commitee, Koinonia will be appreciating the benefits of improved energy efficiency for years to come.

Reprinted by permission of the Metropolitan New York Synod, ELCA

See the original story and learn more about the Synod’s environmental stewardship work.