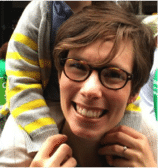 Toward a Better Worldliness: Economy, Ecology, and the Protestant Tradition (Fortress Press, 2017)

“Grace and Climate Change: The Free Gift in Capitalism and Protestantism,” Eco-Reformation: Grace and Hope for a Planet in Peril, eds. Jim Martin-Schramm and Lisa Dahill, (Wipf and Stock, 2016)

“Protestant Ghosts and Spirits of Capitalism: Ecology, Economy, and the Reformation Tradition,” Dialog: A Journal of Theology 55.1 (2016): 50-61

“Freedom Is Not Free?: Posthumanist, Ecological Reflections on Christian Freedom and Responsibility,” Dialog: A Journal of Theology 54:1 (Spring 2015): 61-71

“Luther on the Self: An Ecofeminist Perspective,” Luther from the Subaltern: The Alternative Luther Conference, Aarhus University, Denmark, Oct. 29-31, 2015

“Ecofeminism and the ‘Free Gift,’” Seizing an Alternative: Toward an Ecological Civilization, Claremont, CA, June, 2015

“Outside In, Inside Out: Lutheran Identity and Pedagogy,” Lutheran Women in Theological and Religious Studies, AAR affiliated meeting, San Diego, CA, Nov., 2014

previous Board of Directors, NY Interfaith Power and Light

“My scholarly and diaconal work is rooted in both a deep appreciation for the Lutheran tradition as well as a critical eye for how the tradition is embodied in economic, ecological, and gender relations. Inspired by and informed by these concerns I started a trans-congregational, interfaith diaconal ministry encouraging people of faith to engage one another and their communities as they address issues of eco and social justice.

In my scholarly work I examine the ways the Reformation tradition has influenced world economics and the modern philosophical view of the human. We in the Protestant tradition have much to claim both in terms of responsibility and positive resources. In a world facing intolerable economic inequality and ecological crisis our job for the next 500 years encompasses both responsibility to the tradition—ensuring it’s message continues—and responsibility for it—ensuring this message remains relevant and responsible in a changing world. My areas of interest and expertise are in the ecotheological legacy of Joseph Sittler and modern interactions of Protestantism, capitalism, and climate change. Within these modern interactions I focus especially on Lutheran theologies of grace and justification—both their pitfalls and constructive reformations toward eco-justice.”  —Terra Schwerin Rowe