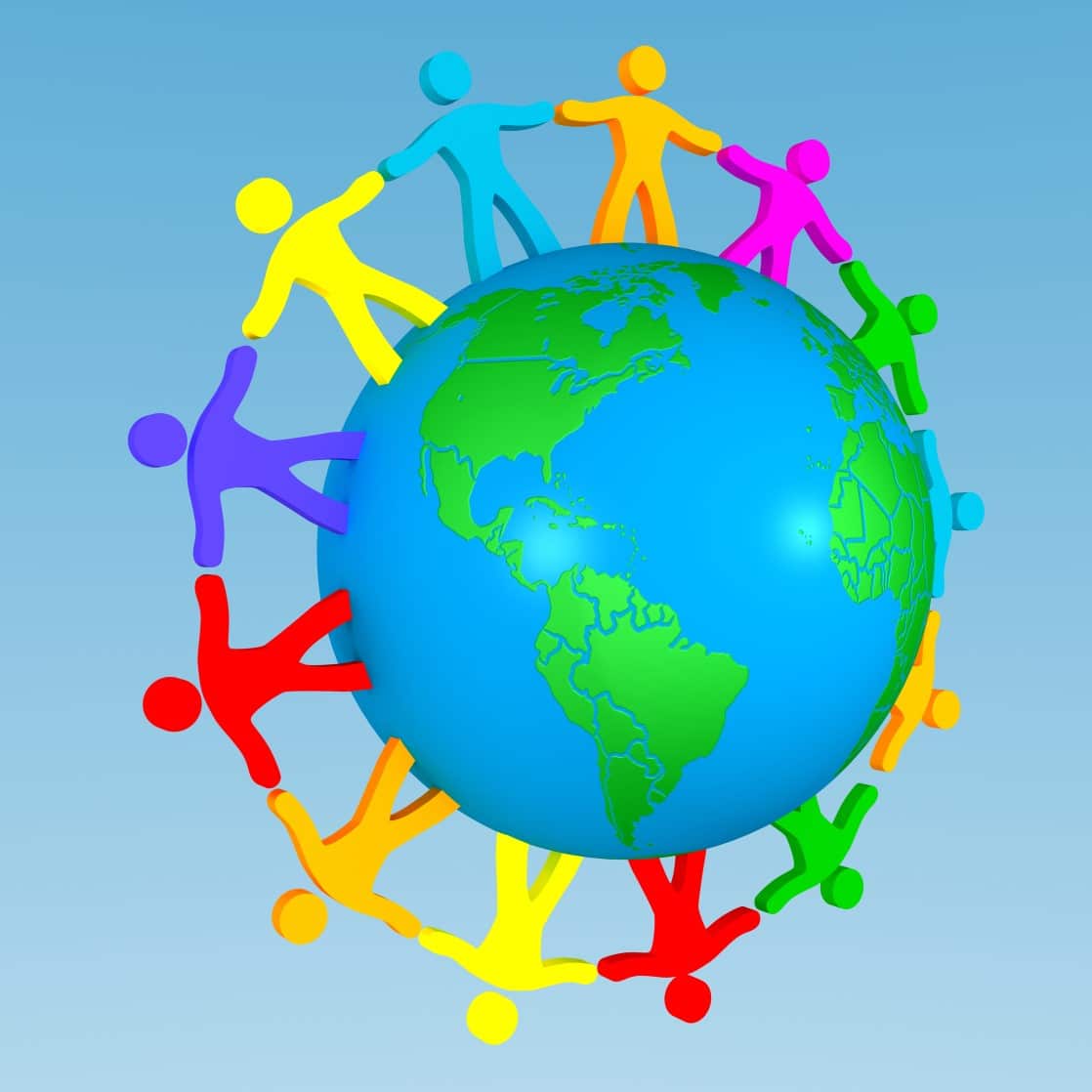 Join all the Earth in a new song to the Lord.

The encounter in Capernaum portrayed in the Gospel for this Sunday is a model of communal interaction. The Roman centurion has a desperate need for healing of his beloved but ailing servant, on account of which he is willing to seek the help, not only of the elders in the Jewish community whom he has patronized with support for the building of their synagogue, but also of the itinerant teacher who has newly entered the city. The elders support his plea, commending it as a proper return for the “worthy” centurion’s generosity; as David Tiede notes, “Luke depicts this officer as a genuine friend of Israel” (Luke. Minneapolis: Augsburg Publishing House, 1988; p. 149). Surprisingly, however, the centurion sends additional emissaries, “friends” whose task is to make clear that the centurion did not base his plea on that worthiness. On the contrary, he declares himself as “not worthy” to have Jesus come to him, and proposes instead that Jesus, as a person like himself, “under authority,” need only speak the word and the servant would be made well. Tiede insightfully explains: “The episode now escalates into a story of the ability of someone who deals in authority all the time to discern real authority when he sees it, even if he has only heard about Jesus from afar” (Tiede, p. 150). And just so: Jesus in turn escalates the exchange yet another step, astonishingly praising the centurion for faith the likes of which he has not encountered “even in Israel.”

Can the reader be blamed for being puzzled by the course of this exchange? What, exactly, is “such faith”?  Again, Tiede offers a helpful explanation: “The faith of the centurion is a discernment of Jesus’ authority and an implicit trust in it” (Tiede, p. 150). We are moved to ask, then, what precisely is the nature of that authority and why should the centurion, or more to the point, Luke’s readers, including ourselves, place trust in it? Luke’s own answer follows later in the chapter, after a second story of resuscitation: “Fear seized all of them,” he writes, and they glorified God, saying, ‘A great prophet has risen among us!’  and ‘God has looked favorably on his people!’” (8: 16). Clearly, the purpose of the story is to manifest the presence of God in Jesus, a presence which brings healing, to be sure, but not only for the centurion’s servant. Here self-interest, care for others, and “faith” merge in an alliance that transcends barriers of culture and power and promotes the common good of all parties.

What significance might this narrative have for care of creation? Besides confirming the above interpretation, the accompanying readings for this Sunday provide a basis for developing that concern. While scholars point to other interpretive antecedents in the Hebrew scriptures such as the resuscitation performed by Elijah and the healing of Naaman the leper by Elisha, our first reading suggests the relevance of an alternative framework: Solomon’s prayer of dedication in the temple. He prays that the presence of God be accessible in the temple not only to the people of Israel but to “the foreigner” who “comes from a distant land because of [Yahweh’s] name” (1 Kings 8:41-42). As Walter Brueggemann explains, Solomon claims for Yahweh an incomparability that “begins with reference to ‘heaven above or on earth beneath,’ thus taking in all of creation as witnesses to Yahweh’s enormous power,” but which, with his reference “to covenant and steadfast love,” also emphasizes solidarity (Theology of the Old Testament: Testimony, Dispute, Advocacy. Minneapolis, Fortress Press, 1997; p. 142). What Solomon prayed for happens in this Sunday’s Gospel narrative, only not in the temple, nor even in Jerusalem. It happens instead in the presence of Jesus, in the Galilean city of Capernaum, bringing together with the Roman centurion both elders of the people and Jesus’ Jewish followers. Read in the assembly on this Second Sunday after Pentecost, moreover, it is a first enactment in the Season of the Spirit of the power of the resurrected Jesus in the community of faith, which by Jesus’ intent now embraces not only all peoples, but also all creation.

Why else should the congregation join “all the earth” in a “new song to the Lord”?, as the psalm for the day invites (96:1)? And how else shall God’s glory be declared “among the nations, his marvelous works among all the peoples?” (96:3). “Worship the Lord in holy splendor,” the psalmist insists; “tremble before him, all the earth.” And the following verses list out the several members of the community of creation:

Let the heavens be glad, and let the earth rejoice;

let the sea roar, and all that fills it;

let the field exult, and everything in it.

Then shall all the trees of the forest sing for joy

before the Lord; for he is coming,

for he is coming to judge the earth.

He will judge the world with righteousness,

and the people with his truth (96:11-13, not included in the appointed reading).

The psalm thus clarifies what is at stake in the Capernaum exchange. The declaration of “the glory of Yahweh” in the psalm, Walter Brueggeman explains, “refers to the claim and aura of power, authority, and sovereignty that must be established in struggle, exercised in authority, and conceded either by willing adherents or by defeated resisters” (Brueggemann, p. 283). The purpose of the psalm’s. . . narrative recital and liturgical enactment is to make visible and compelling the rightful claim of Yahweh to glory. The temple where Yahweh abides and from which Yahweh enacts glory (=sovereignty) is a place filled with glory. But even in its cultic aspect, we must not spiritualize excessively, for glory has to do with rightful and acknowledged power. . . .

From this political dimension of glory as the right to wield authority over all rivals, the testimony of Israel takes care to affirm and enhance temple presence as a way in which the presiding power of Yahweh is a constant in Israel (Brueggemann, p. 285; cf. Psalm 29).

A “pivotal and characteristic affirmation” of the liturgy of the Jerusalem temple, reflected in Psalm 96, is to assert and to enact Yahweh’s legitimate governance over the nations and the people of the world (v. 10), and over the “gods of the peoples” (v. 5). This liturgical exclamation asserts the primary claim of this unsolicited testimony; that Yahweh holds sovereign authority over all the nations and that all the nations must come to accept that rule, which is characterized by equity (v. 10), righteousness, and truth (v. 13.) This assertion, critically, is a rejection of any loyalty other nations may give to any other gods and a rejection of any imagined autonomy on the part of any political power. Positively, the assertion promptly brings the nations under the demands and sanctions of Yahweh’s will for justice.

This claim to universal sovereignty, cautions Brueggemann, is “never completely free of socio-economic-political-military interest.” But that does not mean the claim “is reduced to and equated with Israelite interest, for this is, nonetheless, a God who is committed to justice and holiness that are not coterminous with Israel’s political interest. In the process of working out this quandary, moreover, Israel makes important moves beyond its own self-interest” (Brueggemann, p. 493).

The exchange in Capernaum in today’s gospel is an instance of such a move. Acting on the basis of enlightened self-interest, the elders of the community facilitate action that leads to the healing of the centurion’s servant. In so doing, however, they (perhaps unwittingly) subsume that interest under the authority of the God who is sovereign over all nations. This is the authority under which Jesus acts, as was recognized by the centurion in his “unsolicited testimony” to God’s glory manifest in the locality of Capernaum, which brought Jesus’ affirmation of faith. Strikingly, it is also the authority cited by the Apostle Paul , “sent neither by human commission nor from human authorities,” when he wrote to the churches of Galatia, albeit now explicitly naming that authority: “Grace to you and peace from God our Father and the Lord Jesus Christ, who gave himself for our sins to set us free from the present evil age, according to the will of our God and Father, to whom be the glory forever and ever” (Galatians 1:3-5).

Our challenge is this: how can the congregation that confesses itself to be under that same authority and experiencing such liberation “from the present evil age,” so act within its local context to bring healing not just to individuals, but to the communities in which they live, and ultimately, to the whole earth. If, as Norman Wirzba suggests, the aim of our worship “is to reorient our busy, increasingly frantic, lives around the truth of God’s creative and sustaining presence,” thus “returning . . .  ourselves and the creation to the presence of God so that we might enjoy God’s grace,” might not a healing transformation of the community to which the congregation belongs be expected to follow? It is important to stress here that, as in Capernaum, the cooperation that resulted in the healing of the centurion’s servant comes about by way of neither a covert exercise of power nor overt coercion. As Wirzba points out,

. . . the heart of community is expressed in our “mutual serviceableness” to each other. Community is not built up around the fact that all its members share the same vision, as when clubs are formed around political platforms,hobbies, or social causes. In fact, sameness or similarity is not the key factor at all. What matters is that each member be able to serve another and thus help another flourish in ways that it could not if it were alone. Rather than requiring the difference of another to be sacrificed for the sameness of the group, [this] vision encourages the difference of another so that it can be most fully what it is (The Paradise of God: Renewing Religion in an Ecological Age. Oxford:  Oxford University Press, 2003; p. 175.  Wirzba is discussing the vision of Thomas Traherne, from his Centuries of Meditations).

What the Christian congregation can bring to the larger community is an awareness that communal life is “the dynamic upbuilding and care for difference that is rooted in the sort of love that nurtures and encourages others to flower into the beautiful beings that God intends.  It is the vast interconnection of difference as difference held together by divine love, the mutual serviceableness of one to another” (Wirzba, p. 177).