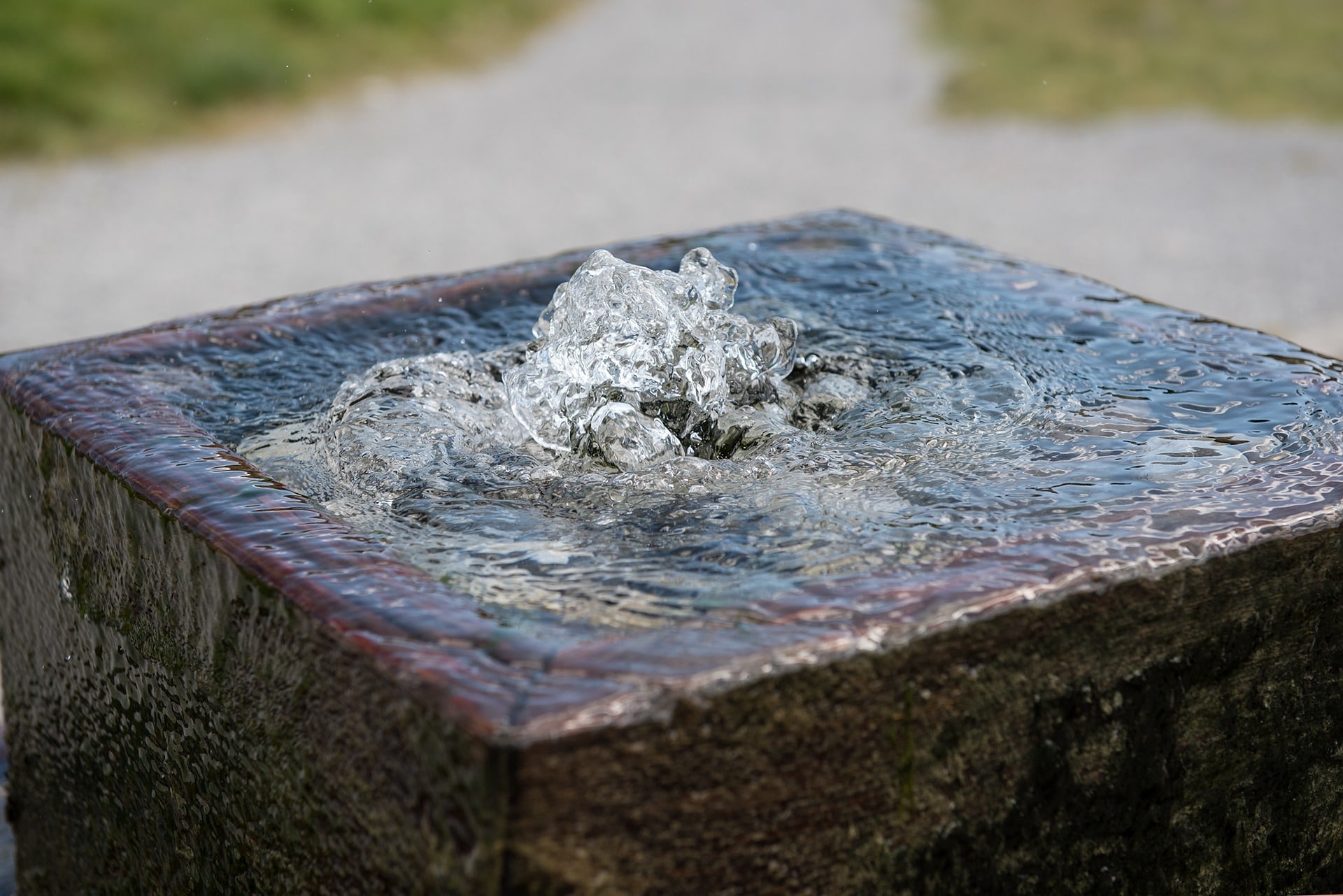 On the day of my ordination at First Lutheran Church, Little Falls, MN, in late September of 1979, I did not expect much more than ritual approval of my new job in parish ministry. I was wrong. As promises were made before the congregation that had nurtured me, my high school teachers, and friends, I was overwhelmed. When, at the close of the service, I was invited to respond, after saying “thank you” all that came to mind was the closing line from Franklin Brainard’s poem, “Raingatherer:” “In a world of earthenware, I come with a paper cup.” (Brainard, Raingatherer, Morris, MN: Minnesota Poet’s Press, 1973)

While that line fits our discussion of the creation of “groundlings” to “till (serve) and keep” (Genesis 2:15) the garden, this week the image is a bit too solid. As we know, planet earth is more than two-thirds water, a fraction closely matched by all living things.  How appropriate, then, that this week’s readings highlight water as both necessary for life and as an image for the flow of “living water”—”a spring of water gushing up to eternal life.” (John 4:14) The centrality of water is found in the psalmist’s affirmation, “The sea is his for he made it, and the dry land which his hands have formed” (Psalm 95:5). But, in spite of recent concern over the Earth’s water “resources,” unfortunately, the most appropriate line of verse for Americans in 2017 would be, “In a world of water, we come holding a plastic bottle.”

This jarring contrast suits our First Reading from Exodus in which we meet the pilgrim people complaining loudly about their lack of water.  Too often we see Genesis 12-50 and the remaining books of the Pentateuch as focused on “redemption,” assuming the scriptures are done with “creation.” But, especially when our focus is on water, it is clear that it is the very same Creator God who frees Israel from Egypt. For “what God does in redemption is in the service of endangered divine goals in and for the creation.” (Terence E. Fretheim, Exodus, Louisville: John Knox, 1991, p. 13)

As the people repeat their well-rehearsed litany about being dragged into the wilderness to die (in this case) of thirst, it is surprising that the divine response contains nothing about “attitude adjustment,” only directions for finding water.  Moses is instructed to use “the staff with which you struck the Nile” (Exodus 7:19-21) and “strike the rock and water will come out of it, so that the people may drink.” (Exodus 17:6)

This time fresh water appears, not the bloody river of the First Plague. This occurs as the LORD stands before Moses “on the rock of Horeb.”(Exodus 17:6) Already the gift of torah is anticipated. Just as water enables human bodily life to continue, so also does the life-giving torah hold the community together.  As Fretheim writes, “…social order is a matter of creation.  The gift of the water of life comes from the same source as the gift of the law, a source of life for the community of faith.” (ibid., p. 190)

We are all too aware that many around the world—predominantly women—still lug water long distances daily to ensure survival for their families. Two years after one of the most egregious examples of environmental racism in the United States, tap water in Flint, MI is still unsafe to drink.  Will the Dakota Access Pipeline routed under the Missouri River on disputed treaty land be safe, or will another pipeline leak contaminate drinking water for hundreds of thousands?  What about the one hundred million plastic water bottles used every day around the world?  Those that are not recycled (the vast majority) are thrown into landfills where they do not begin to decompose for seven hundred years; the rest are thrown into rivers where too many end up in the Great Pacific Garbage Patch. Certainly, a legal framework both guaranteeing safe water and protecting the planet from plastic waste would be a step toward ecojustice.

That this struggle is far from easy is evident from our Second Reading. While at the center of Paul’s theology “stands the transforming act of God that provides the solution to the problems afflicting both humanity and the wider nonhuman creation,” all is not yet complete.  (David G. Horrell, Cherryl Hunt, and Christopher Southgate, Greening Paul, Waco: Baylor, 2010, p. 170) At the same time the community of faith “boasts in hope” (Romans 5:2) trusting in the ultimate success of God’s justice, another regime works actively to thwart hope and convince humankind that the only safe route to security and peace is self-interest, often based on national or ideological “tribalisms,” the most fertile contemporary sources of idolatry.

Even in the face of this demonic opposition, confident hope is maintained.  As Paul puts it, “we boast in our sufferings, knowing that suffering produces endurance, and endurance produces character, and character produces hope, and hope does not disappoint us.” (Romans 5:2-5)  Because we live in sure and certain hope of resurrection, even as we experience cruciform reality in our struggles for ecojustice, we continue in confidence.

If this description of struggle seems unfamiliar to those who serve creation, it soon will be apparent. The forces defending what is billed as “free-market capitalism” in the United States have thrown down the gauntlet and seem ready to marginalize all who see the creation as God’s gift and threaten to all but eliminate the federal government’s role in protecting the natural world, which they see it as a “resource dump” to be mined in every possible way, enriching a wealthy elite. The January 2020 revised definition of “Waters of the US,” which curbed protection of rivers, streams, and the likes, is a case in point.

Because this week’s reading from Romans drives to Romans 8 with its “vision of cosmic reconciliation that includes and incorporates all things,” (Horrell, Hunt, and Southgate, ibid.), living out of God’s future suggests that faithful ecojustice advocates keep faith and counter those who would “privatize” everything in order to build the “commons,” even if only on a local level. The gifts of water, air, and atmosphere must be part of the shared inheritance to be nurtured as we “till (serve) and keep” God’s garden earth. The odds seem against us, but now “much more surely” (Romans 5:9-10) can we participate hopefully in assuming responsibility for the future and health of creation.

At first glance, our Gospel Reading seem to reveal a woman short on courage, furtively going to draw water in the middle of the day when everyone else has finished this tedious chore. What is immediately apparent is the contrast between this woman and Nicodemus.  He is a male Jewish insider with well-regarded credentials; she is a female Samaritan outsider with what can only be seen as a checkered past. Even though through a slow development we see Nicodemus being transformed in the narrative of John’s Gospel, it is not long before this  Samaritan woman can be found among the townspeople she had been avoiding with a bold invitation: “Come and see a man who told me everything I have ever done.  He cannot be the Messiah, can he?” (John 4:29)

The turning point for this ill-used woman seems to be Jesus’ offer of “living water.” Not surprisingly, in John’s rich world of double meanings, she assumes that Jesus is offering “flowing water,” water from a stream or artesian well. What’s more, when Jesus goes on to define this water as “a well of water gushing up to eternal life” (John 4:12), she is even more excited about the possibility of water that will never run out, sparing her the embarrassment of a daily appearance at the well.

As the conversation continues with a probing of the woman’s past and a discussion of authentic worship, things begin to change. Finally, she senses an unimagined presence and blurts out, “I know that Messiah is coming. When he comes, he will proclaim all things to us.” (John 4:25) Jesus replies simply, “I am.” (John 4:26) And the next time we see the woman she is inviting townspeople to “come and see” Jesus.  She leaves her water jar leaning against the well, for now she contains “a spring of water gushing up to eternal life.” (John 4:14)

This should be no surprise, for John’s Gospel begins with a flowing movement of creation and new creation.  In the Prologue, the one who reveals himself to the well woman as “I am” is the Word who “was in the beginning with God. All things came into being through him, and without him not one thing came into being.” (John 1:2-3a)  It continues with the efflorescence of light and life and the “Word becoming flesh” to “pitch his tent” as a human. (John 1: 4, 14) This powerful current carries Jesus as the Risen One to be seen as “the gardener,” (John 20:15) bringing renewal to the garden of life.

“Deep incarnation” is one apt description of this flow.  Coined by Danish theologian, Niels Gergerson, it has found a ready reception, recently reported in the proceedings of a 2011 Copenhagen conference exploring its possible meanings. (Niels Gregerson, Incarnation: On the Scope and Depth of Christology, Minneapolis: Fortress, 2015)

In one of the most helpful essays, Celia Deane-Drummond of Notre Dame writes: “Theologically, deep incarnation can be understood to act at the boundary of creation and new creation, where Christ enters into the human, evolutionary, and ecological history in a profound way so that through the living presence of the Holy Spirit that history is changed in the direction of God’s purposes for the universe in the pattern of Christ.” (Gregerson, 198)  This current, according to Deane-Drummond, “is also a call to act out in proper respect for the natural world and all its creatures.  It is, in other words, unavoidably an ecotheology marked out by a call to build a community of justice.” (ibid., p. 199)

We see the power of this new pattern as our pericope ends,  After hearing the invitation of the well-woman to “Come and see,” people from Sychar do just that. As Craig Koester suggests, “By going out of Sychar to meet Jesus, inviting him into their town, and calling him “Savior,” the Samaritans give Jesus a welcome similar to those granted to visiting rulers.” (quoted in Warren Carter, John and Empire: Initial Explorations, New York: T and T Clark, 2008, p. 189)  As the giver of “living water” Jesus’ authority exceeds that of the emperor.

This authority surely is enough to encourage us to continue as “water protectors” even in the face of a culture that sees life as only instrumental to economic growth.  This encouragement can be amplified in our worship. Lisa Dahill has recently suggested that most baptisms as well as affirmations of baptism take place in local waters. “Baptizing outdoors recasts the meaning of baptism. Here Jesus Christ is not a mark of separation—Christians here, non-Christians there—but is the one who brings Christians and our best wisdom, faith, and practice into restored unity in our shared waters with all people and all creatures.” (Lisa E. Dahill, “Into Local Waters: Rewilding the Study of Christian Spirituality,” Spiritus, Vol 16, No. 2, Fall, 2016, p. 159)

This flowing faith might also be nurtured in our houses of worship with the installation dramatic art. Kristen Gilje has painted a permanent altar fresco for Faith Lutheran Church, Bellingham, WA, that features vivid, flowing water cascading from the roots of the tree of life. While this theme has nurtured worshippers since the mosaics of San Giovanni Laterana were installed in the fourth century, CE, today this strategic beauty is even more crucial in empowering us to endure threats to creation and to live from a hope that does not disappoint.